"We are the Photographers, We are Palestinians and We are the future"

This photo exhibition has been realized by 9 young Palestinians ; aged 12 from 17 years old, following a workshop that was held in May and June 2006 by Anne (France) and Marie-Eve (Quebec) in Al-Rowwad Centre ; at Aida Refugee Camp, in Bethlehem, Occupied Palestinian Territories. 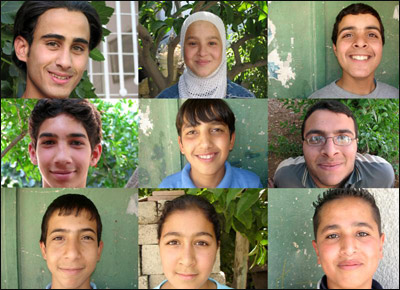 With only two digital cameras, the young photographers found a new way of looking at their environment and reflect on their reality. By showing their pictures to the community and outside, they present their visions and their stories. Some assignments such as “games and activities of the children in the camp” ; “what do I do with my friends ?” ; “my school” ; “my home” and “the persons I love” were proposed to them. Other pictures were also “free”. Around 50 pictures were selected by the group among hundreds. The texts were also directly written by them ; thus adding another dimension to the photo exhibition.

Through their eyes, the photo exhibition gives a unique insight into the daily life of the refugee camp and into the visions ; hopes and lives of the young Palestinians and how they cope with the situation. With more than 4,000 inhabitants, the camp is overcrowded. The economic situation has dramatically worsened since the beginning of the second Intifada. The unemployment rate is very high and most inhabitants of the camp live below the poverty line. The children have no playgrounds, except the narrow streets and the roofs.

The recent construction of the Wall, here built far from the Green Line, has had a detrimental effect on the life in refugee camp. The Wall has been built just a few meters away from the houses and the girls’ school. The fields of olive trees where the children and families used to go to play and relax have disappeared behind a massive eight-meters Wall. The Wall, coupled with a military tower, has a strong psychological impact. It destroyed your horizon in every sense of the term. The military Israeli incursions are very frequent. Since the beginning of the Second Intifada, hundreds of people ; including many youths, have been injured. The new plan of building a synagogue ; just next to the Muslim cemetery of the camp, further increased tensions.

One of the young photographers took a picture of a kite and explained to us how, for him ; the sky has become his only playground. Another one took pictures of birds on the Wall. He wanted to say how much he would like the Palestinians to be free like them.

The photo exhibition will be first shown to the community of the camp and then will travel with the theatre group of Al-Rowwad, including some of the photographers, in France and Belgium during summer 2006. Al-Rowwad is an independent cultural Centre that proposes cultural and artistic activities to the Palestinian Youth in Aida Refugee camp.

You can see the exhibition online but only in french.